A sequel to the previous book, once again based on the idea of "what if the creatures and situations in fantasy RPGs were as hot as I always wanted?"  This book is 80+ pages total, written from the point of view of the same author from the first book investigating 4 more stories of people being changed into hot monster creatures. It has references and callbacks to the first book, but the 4 stories are self-contained and stand alone, so you don't need to have read the first book to get this one.

The stories in this book feature:

- a practical farm girl dabbling in wild magic and merging with the beast she was trying to summon, leaving her a mix of lizard, donkey and centaur, that somehow both has a large dick and lays eggs, because I'm extremely me. The magic also spreads to two other women she meets, giving each of them part of that same change.

Each story has full colour before and after pinups of the main character, as well as a full page illustration of a mid-TF sex scene, all drawn by Angrboda. There's even some extra concepts and sketches in an appendix at the back, to get even more value for your money.

In order to download this book you must purchase it at or above the minimum price of $10 USD. You will get access to the following files: 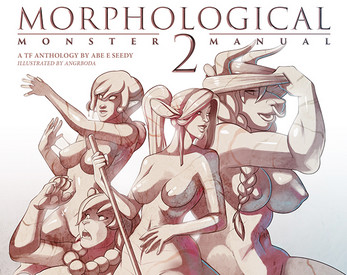